Elements and symbols in the Capacity View 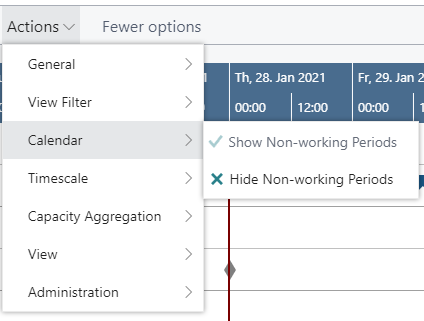 Each operation of a Production Order is represented by a bar, the color of which depending on the belonging order's category. The bars of the operations are colored during working times and white during non-working times.

Operation with zero setup and runtime

Sometimes there will be operations that don't occupy any capacity, e.g. drying phases. Such operations will be visualized now in the Capacity View by a vertical line so that you can still see that something's going on there but not using any capacity.

Categories in the Capacity View are distinguished by the same colors as in the Production Order View.

Show or hide the setup times by a context menu.

Links between operations are shown after having clicked one operation of the according production order. 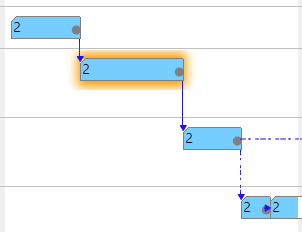 If you click an operation, a vertical line in the color of the operation's status appears, indicating the due date. 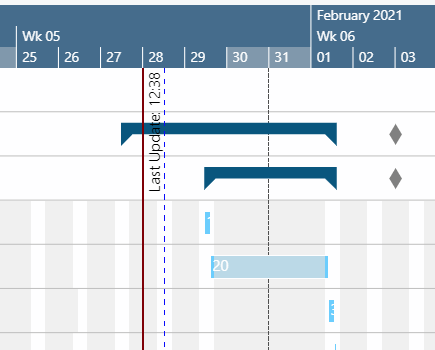 In the VPS, you can show a capacity curve in the Capacity View, to see free and exceeded capacities, a red box indicating an overload.

Besides, according symbols in the table part show capacity bottlenecks.

You can also change the capacity aggregation period.

Please note that if there isn't any overload in the complete plan the symbol column will not be shown.

The sequence of operations in BC is determined by routings (and reservations). If a production order is created or recalculated, the operations are arranged according to these specifications. In the planning board, these operations can be moved in relation to each other, thus perhaps causing sequence violations.
The VPS now draws attention to these "not allowed" overlaps by symbols at the concerned elements and in the table part, where the information is "passed up" to the parents in order to indicate the overlap even in collapsed state or when the element is scrolled out of view.

The feature gets activated/deactivated in the "Scheduling" area of the "Setup" dialog: